Yes, you heard it right. It’s our dream to enable all the businesses to provide world-class customer service and increase their revenue.

Then what did we built in the month of May?

Let’s have a quick ride!

{ If you have missed previous release notes, please head here}.

Now you can build your chatbot with multiple languages. We support almost all languages.

Now you can use HTML messages and also preview them in the bot builder Kompose. Please refer to this Doc for sample HTML messages.

Now you can use pre-built bot images and you’ll be able to select any of the bot images based on your interest and requirement.

Now you can filter and see the Auto resolved conversations by Human and Chatbots.

We have changed the teammate’s section’s UI to support the multiple team features which are coming in the future, where you’ll be able to auto-assign conversations based on the teams/departments.

We have added FB icon in the dashboard section to notify agents that the conversation was initiated form Facebook and differentiate it from other conversations.

Now you can see last seen of your particular team members. Last seen refers to the last time the agent was online on the dashboard.

In the new dashboard analytics interface, we’ve made changes to our agent’s table UI which shows all the conversation status of the agents along with their display photo.

By clicking on the link users waiting for first response from the Dashboard Teammates section you will be able to see the conversations which are waiting for ‘first response pending’. This will help you to quickly analyze and reply to all those pending queries.

We have released the new versions of Objective-C SDK (v7.5.0).

We released the new versions of the iOS Agent App (3.1.2)

Updates in the Android agent app:

That’s all for now folks. Watch out this space for more updates.

Samir is a support engineer at Kommunicate and he is a customer's champion. 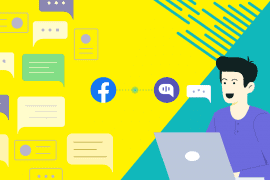