After a lot of hustle and jaded release nights, we have released the latest version of Kommunicate. The February release consists of Zapier integration, other major improvements & bug fixes.

If you have missed the previous updates, please read here.

Zapier is one of the powerful online automation tools for connecting with your favorite apps. We have released the public beta version of Kommunicate Zapier integration. Now you connect your favorite customer support tool Kommunicate with different apps and automate your workflows.

At the moment we support 2 types of triggers (User creation and User updation) but we are working on adding more triggers to make it more efficient.

Give a try and please let us know your feedback.

The ability to refine the conversations has been simplified, now you can perform a detailed search by adding tags like ‘Spam’ & ‘First Response Pending’ in the status and also can search conversations based on the assignee.

Now in the bot analytics by default, the data of assigned bot will be shown based on the bot routing rules.

That’s all for now folks! Watch out this space for more updates!

At Kommunicate, we are envisioning a world-beating customer support solution to empower the new era of customer support. We would love to have you on board to have a first-hand experience of Kommunicate. You can signup here and start delighting your customers right away. 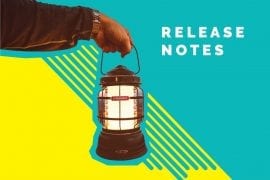